Grounded here with a heavy backpack, several hours of waiting time and fairly goof internet connectivity, I have decided to be a good girl and write this blog post. Suddenly world feels imposingly well-connected, after few weeks spent in a mountain exile. 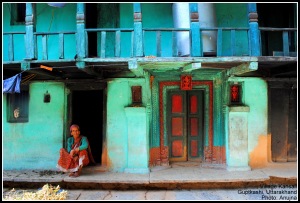 So this time when I packed my bags and stood at the threshold, I asked her, “You really think I can do this? What if, I make mistakes?!”

She just smiled her bright child-like clear and yet knowing smile, “Just go and get to work. What matters in the long run is the experience you gain out of this. Learn from it and everything will be okay.”

This talisman and a few sketches on rough papers was all I had to back my courage up, as I left the warmly familiar territory of Himachal Pradesh to travel all the way to a tiny village, way up in Uttarakhand. Warning: Do not try to find, “Sena Gadsari” on the map of India; nobody down in the nearest market place seems to have heard the name of this village.

So, after a series of rickety rides, changing from one bus to another jeep and then one more, I reached the place where a trio from Bangalore, has been staying since past one year.

Saritha, Shweta and Vincent of, People’s Power Collective have started a community radio station with the gadhwali locals. Here, out of all the chaotic medley of cultural, linguistic and behavioral differences, a melody of dialogue has evolved.

All the programs of the radio are recorded in gadhwali-hindi, from the villages nearby. A desi treasure of songs, plays and jokes is broadcasted by the fabulously trained radio presenters of “Mandakini Ki Awaj”.

It was a very long journey for Manvinder ji Negi, who cradled a very big dream in such a tiny village. The radio has indeed reformed Manvinder ji and his wife, Uma didi.

With no electricity at night, in flickering light of a dusty oil lamp, I used to watch Uma didi, sitting by the chulha, making aloo ke parathe for us all… and I used to think about her day-time incarnations!

Uma didi, too engrossed in stringing a playlist together, not looking up from the laptop, holding her hand up, and gesturing us not to interrupt!

Uma didi. Sitting straight-backed in the middle of numerous buttons and wires of mind-boggling radio equipment, confidently presenting her program!

Uma didi, who had no voice beyond the kitchen walls, now is heard all through the valley! One radio changed this!

But very soon I realized that raising this radio station in a built form was not going to be as easy as writing it here… the biggest hurdles in every profession, being young and being a girl stood laughing shamelessly in front of me!

We have absolutely let our work culture rot away over decades. And now we, as a nation, have come a long way ahead in time, to blame everything on long gone era of the british rule! Hard work has no value in the market, and so does a given word. Those who work and those who get the work done are both equally unconcerned with the job at hand. Conquering the Himalayan peaks would have been easier than changing this dull hopeless work culture!

But somehow, everywhere I go, I encounter a fine weaved, invisible network of good natured people, who carefully take me forth… this time, two helpers at the construction site came to my rescue. Mahavir ji and Pramod ji brought in our mason, Jeetpal ji, a straight forward, skilled man of few words. Jeetpal ji hastily stuffs his beedee away when I approach, and calls me “Ji Sir”! He listens very attentively when I explain the design and his questions are practical, requiring me to think thoroughly. He gives me a secret joy of having been able to answer a fabulous question!

This very work gave me a great courage to work further. I would go down to the market alone and buy a truckload of building supplies! We broke boulders into aggregate with a hammer and unloaded truckloads of sand, passed pan of heavy wet concrete and learned to do fine local stone masonry, “chinai”, bent steel bars and tied reinforcement cage.

Every day, before the workers arrived, our engineer, Vincent would be ready at the site with me and we would leave the battlefield only after everyone else went home, all tools and equipment back in their place.

We all worked together as a construction gang, had our chai together…. One roti with a spoonful sabji on top, chased down with cool tap water, was our usual lunch, but nobody seemed to complain.

Apart from these there were other, more daunting challenges that Saritha had warned me about. The people from local partnering NGO of the radio are not completely convinced about building an earth structure. Having spent generations in houses built with stone and mud, now the gadhwalis too want a cement-concrete building just like those in the big cities. How to hold verbal arguments with them to explain why a scientifically built stone-mud building is far better than a cement one?!

Initially we had to stand firm, enduring their harsh antagonism. 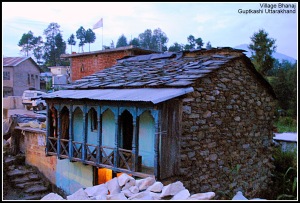 They would not participate if I called a meeting to discuss the design, yet late at night, over dinner, there would be sudden arguments in the kitchen… voices would rise…. As Saritha often phrased, it was very difficult to stop others from being aggressive without being aggressive. I had to lead the conversation away from “whose fault it was” and make everyone focus on “how to strengthen mandakini ki awaj, through building”

One CANNOT feel hurt and get angry with them, no matter how harsh they may act, because deep inside, I am more hurt with the fact that their aesthetic judgment is shattered and ruined by my urban crowds…. It is not their fault!

But I had to leave this sensitive incarnation back in the kitchen when I stepped on the construction site. Here I had to ensure that the instructions were strictly followed, leaving no tolerance for discussions or negotiations of any sort. I learned to not entertain any rude questions or interruptions from the locals while my construction gang was standing there, awaiting my instructions.

Slowly everyone got accustomed to this discipline. Their antagonism faded further when they saw me not just acting smart but actually working with the men. Slowly their hands joined us when we were in need. Arguments in the kitchen got replaced by light humor and friendly discussions. One day we unanimously agreed that swaying bamboo clumps would look beautiful along the pathway! And my grand-ma’s Marathi “amti” prepared on chulha, met its applause in the kitchen.

On one side, we were finishing the construction tasks scheduled for this visit. The radio station that was born in Didi’s imagination is slowly raising its head above the ground…

In next two months, we will complete the building, with stones excavated from the foundation, abodes of locally mined soil, slate stones and wood. 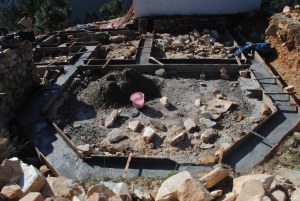 Finished casting the plinth and I set out to celebrate with the rest of the radio team. Although, mirror polished, glittering shopping malls of Dehra seemed to mock us, after weeks spent with unpredictable load shedding spells, we decided to concentrate more on feeding ourselves well, before parting our ways for a short break.

Aimlessly wandering alone through Rishikesh, I took a dip on one of the ghats, spent evenings at the famous Ganga arati, watching tiny oil lights drifting gracefully in water…. sometimes I would stretch my evenings further, over sumptuous dinner while some Israeli travelers suddenly strummed their guitars at our usual haunt of café nirvana…. From soulful ganga arati to jazzy jam sessions, this is distinctive cultural diversity of Rishikesh. 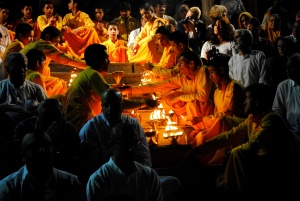 I have been told often that there are bad people in world, but somehow nobody intruded my solitude even by staring, while I walked over the Lakshman jhoola, back to the hotel, alone, late at night. Again I would spend some time, standing at the roof terrace, watching ma ganga draped in silvery moonlight, flowing soft and soft against the backdrop of rugged Himalayan hills… There is something in that river and the mountain…. They just cannot remain plain simple, river and mountain…. They charm the very existence and then we cannot remain plain simple people… 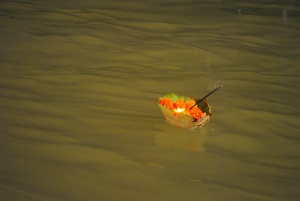 If long, long ago, man had felt his soul vibrating on the banks of the Ganga, had flown with the river and risen with the mountain…. And called it being a hindu, then it has deep blue green tinge of that night, just as it has vibrant saffron of the dawn….

Now I am here, in the bustling staring city of Delhi, taking your leave to go home… to come back again with another story of building adventures….

2 thoughts on “From the Radio Station…”

This blog is just a place for me to share the silliest things I am trying and failing and trying once again....
I do not know much about this world but it seems like a war zone sometimes.... and if it is true, I think I have chosen my side.
I do not hope to win this war... and it does not matter anymore. But this war has taken me on a journey inward, into a beautiful world that I hope will exist one day....

Fresh from the pen…..

Catch me on FB…

Looking for a lost note?!